The kids are grown and out of the house and maybe even having kids of their own now. The home you’ve had for a couple decades has served you well, but suddenly it’s a bit big for what you need. When you’re still working and healthy, it might be the right time to consider downsizing to a smaller home and a simpler life.

By 2030, the population over 65 will increase by 80 percent as baby boomers age, the oldest of which turn 70 this year, according to the National Association for Senior Move Managers. Many boomers are proactively decluttering their lives and downsizing while they can still make decisions without medical needs dictating their next move.

If you’re downsizing or helping a loved one to do so, know that you’re not the only one who feels a bit intimidated. Here are a few do’s and don’ts to help make the process a positive experience.

Don’t set an unrealistic timeline. Just as you wouldn’t want to rush into buying your first house, take your time finding the right home and downsizing your or your loved one’s belongings effectively. Jennifer Pickett, associate executive director for NASMM, a network for professionals who deal with the needs of seniors, notes that the downsizing process is likely going to take longer than you imagine. “If you think for one instant you can do this in a weekend or two, it’s not going to happen. Forget about it,” she says.

Regina Leeds, professional organizer and author of “Rightsize … Right Now!: The 8-Week Plan to Organize, Declutter, and Make Any Move Stress-Free,” says establishing a timeline is important to avoid dragging out the process. “It shouldn’t be open-ended because it’s not going to be fun,” she says.

Leeds’ book advises on how to get through the process of organizing and moving in eight weeks, but “if time is no object,” she says, expect to take six months to go through all your belongings, establish what you’re going to sell, give away or trash, put your current place on the market and purchase or lease your next home.

Do seek help from people who know what they’re doing.
As the senior population grows, so does the industry for professionals who specialize in helping them – whether it’s in real estate, health care or organization. “There’s a reason there’s plumbers and electricians. It’s the same reason that the need for senior management is emerging,” Pickett says.

Nikki Buckelew, co-founder and CEO of Seniors Real Estate Institute, which educates real estate professionals on senior housing and the moving process for older adults, says downsizing specialists will often have the best understanding of which type of community will fit your needs.

“If you can locate an agent in your market that has knowledge about the resources available, then you’re ahead of the game for most people,” Buckelew says. Many real estate agent locator sites offer the designation of senior or downsizing specialties, including the National Association of Realtors’ Senior Real Estate Specialist designation, and sites like NASMM have search features that allow you to find professionals in the area.

As the downsizing and senior housing industry grows to meet the expanding aged population, specialists in different areas are networking together to be able to provide a wealth of resources and information to their clients. Sue Bullock, consultant and manager for Main Street Estate Sales in Ottawa, Illinois, says working together provides them with great leads for future business, “People are living longer than they used to, they have a choice – they don’t have to stay in their homes. … So they’re shedding all the big furniture and the stuff that their kids left for 50 years and they’re going into the smaller communities. So we work with [senior real estate professionals] a great deal,” Bullock says.

Don’t assume your housing options are limited. Whether you’re looking for a 55-and-up community or you’re looking to go into assisted living, be sure you choose a place that meets your needs where you’ll be comfortable and happy.

“Right now there’s a huge movement on these tiny houses. … My generation, we kind of collected things and now nobody wants any of the stuff, and our kids don’t want the stuff. And so now it’s time to minimalize and get into the smallest place possible,” Newquist-Nolan says.

Do consider your financing options. Taking out a mortgage later in life may not sound like a great idea, but it may be the only way to move into the right space for you. Buckelew says few downsizing seniors financed their purchases a decade ago, but now she sees about 1 in 3 senior homebuyers financing them in some way.

“At the end of the day, should we have to sell his home, or if he moves out there may be no equity in it. But if that means for the next 10 years he’s going to have an amazing life and get to do what he wants, then so be it,” Buckelew says.

Don’t put anything in storage.
The entire point of downsizing is to have less, not simply hide it somewhere else. Renting a storage unit will only move your problem of owning too many things – and cost you far too much for it.

Newquist-Nolan says a former client chose to rent a storage unit for collected items, rather than auction them off or donate them.

“She probably paid $500 a month in storage, and you times that by 10 years. What’s the value now on those items?” she says. Newquist-Nolan recommends taking a few pieces from a collection to enjoy, and allow the rest to be sold at an auction, putting some money in your pocket as well.

An estate sale can be effective for offloading most of your belongings that would otherwise go into storage, particularly if you’re relocating to a significantly smaller home. Bullock recommends making the decision of what will go with you and what will be sold before you even call about an estate sale. “We always want people to have a reason why they’re keeping something, not ‘just because,'” she says. Once you’ve made those decisions and found an estate liquidator you feel comfortable with, “just let them take over,” Bullock says, noting the professionals are able to go through the appraisal, setup and sale process without letting memories clog any judgment, which can complicate matters.

Do know what you own before you throw it away.
You’re making the right move by deciding to forego the storage unit, but don’t toss everything into a dumpster right away, either. It’s possible some of the items you’ve held onto for decades have increased in value over time. Newquist-Nolan suggests going through possessions methodically, and consider bringing in an appraiser to tell you what might have higher value.

“Danish modern [furniture] is huge right now, and people are … overbidding on prices for that stuff,” she says, warning not to sell a desk in a garage sale for a hundred bucks. “It could be $1,000.”

But don’t assume selling your items with make you a millionaire, either. Buckelew says the average retiree has a modest home and lives on social security, and in fact “we often have a hard time getting estate liquidators to do sales because there’s no money in it.”

Don’t think of this as your last move. Moving to a community geared toward older adults or a senior care facility may seem like a natural final step for you, but it’s possible you’ll make another move sometime down the road.

Buckelew says many proactive downsizers who move to 55-and-up communities don’t foresee another move down the line to a place where they could receive more care, though it’s often necessary. To make sure your next move is the right one for you, she recommends keeping that possibility in mind and speaking with your loved ones about communities you would enjoy.

“Everybody has a tornado evacuation plan – if you have a tornado that comes through, we all know where to go in our house or in our storm cellar, because that’s just what we know to do,” Buckelew says. “And very few people have a plan about what they’ll do if they can’t remain independent in their home anymore.”

Active communication and planning for what could be ahead will give younger generations a greater understanding of how to serve your best interests, and also help you make downsizing not just a single move, but a successful way to keep organized.

Can You Actually Turn a Profit Flipping Homes in Today’s Market? 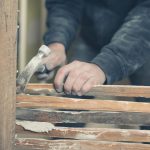 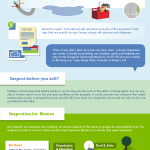 What you can Expect from a Home Inspection