Sales of newly built homes rose in July to the highest level in nearly a decade, a sign of solid momentum in the U.S. housing market.

Purchases of new single-family homes rose 12.4% in July from a month earlier to a seasonally adjusted annual rate of 654,000, the Commerce Department said Tuesday. That was the highest level since October 2007.

Economists surveyed by The Wall Street Journal had expected home sales in July to slow to a pace of 580,000. Sales in June were revised down to a pace of 582,000 from an initially estimated 592,000.

Through the first seven months of the year, new home sales also rose 12.4%, compared with the same period in 2015.

The housing market has been a bright spot in the economy this year. Historically low mortgage interest rates, improving income growth and steady job creation have supported buying of both new and existing homes.

The average rate for a 30-year fixed rate mortgage was 3.48% at the end of July, down a half-percentage point from a year earlier, according to Freddie Mac.

Sales of newly built homes account for less than a tenth of total U.S. homebuying activity. Also, data on such purchases are volatile from month to month and subject to later revision. July’s increase came with a margin of error of plus or minus 12.7 percentage points.

New-home sales in July were up 31.3% from a year earlier. The latest figure brings new-home sales back to the level recorded just before the recession began. 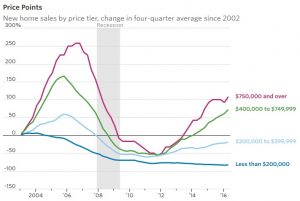 Tuesday’s report showed there was a 4.3-month supply of newly built homes available at the end of July. That was the smallest supply in three years. The median sale price of a new home sold in July was $294,600, down slightly from $296,000 a year earlier. 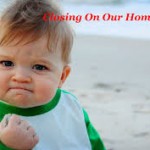 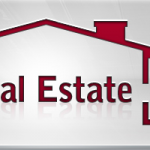 Before you buy….
Menu